The ‘Kangaroo’ and ‘Dingo’ are the earliest painted representations of these iconic animals in Western art. They were commissioned by the gentleman-naturalist Sir Joseph Banks following his participation in Captain James Cook’s first voyage to the Pacific, and became central to how the voyage was seen and understood by the European public. Both paintings were executed by George Stubbs, the foremost animal painter in Britain during the 18th century, within two years of Banks’ return.

They are the most significant artistic productions directly related to the voyage, and represent interesting technique on Stubbs’s part due to his decision to paint in wax. They were exhibited as a pair in London in 1773 and have remained together in the UK ever since. They are still in their original frames. 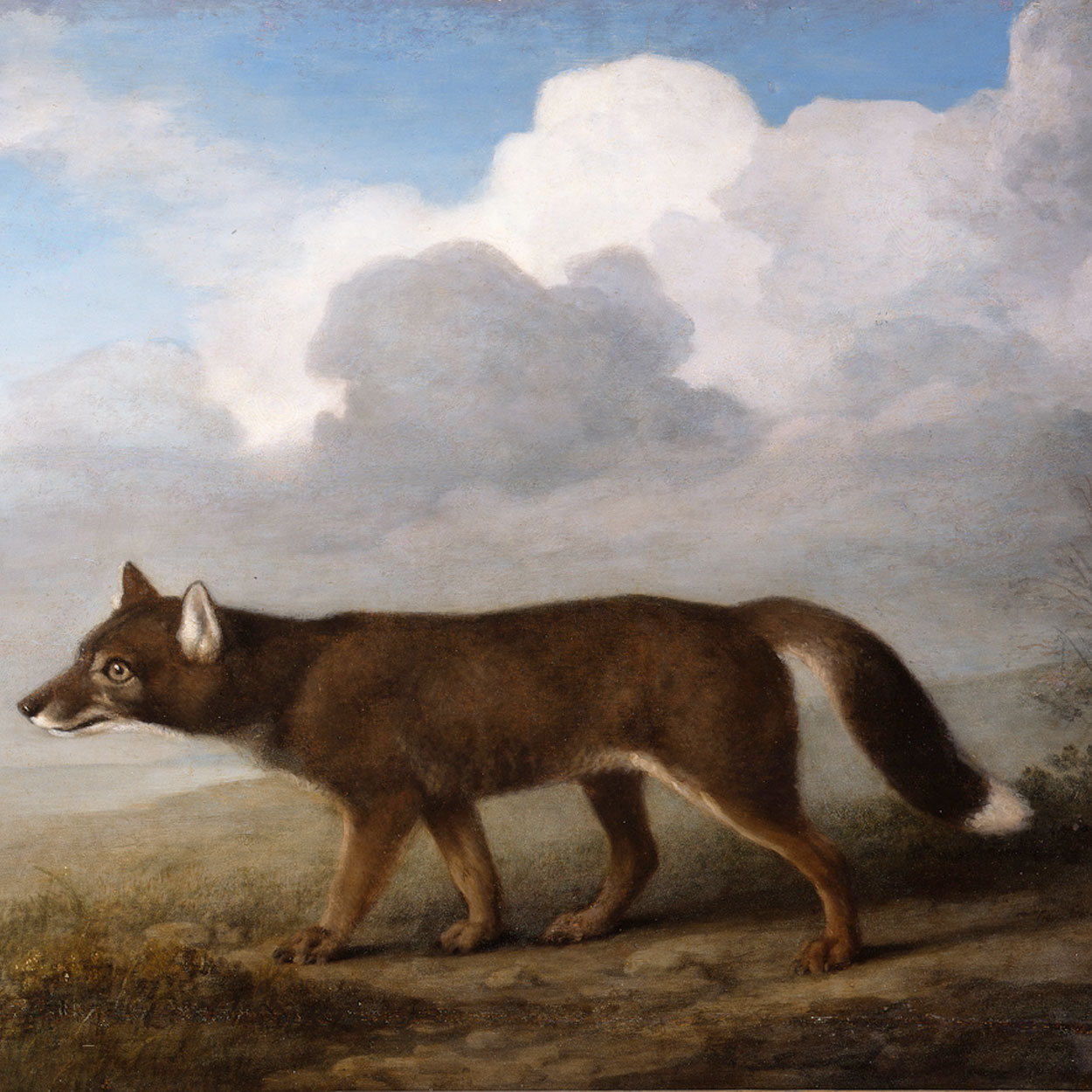 Portrait of a Large Dog (Dingo) 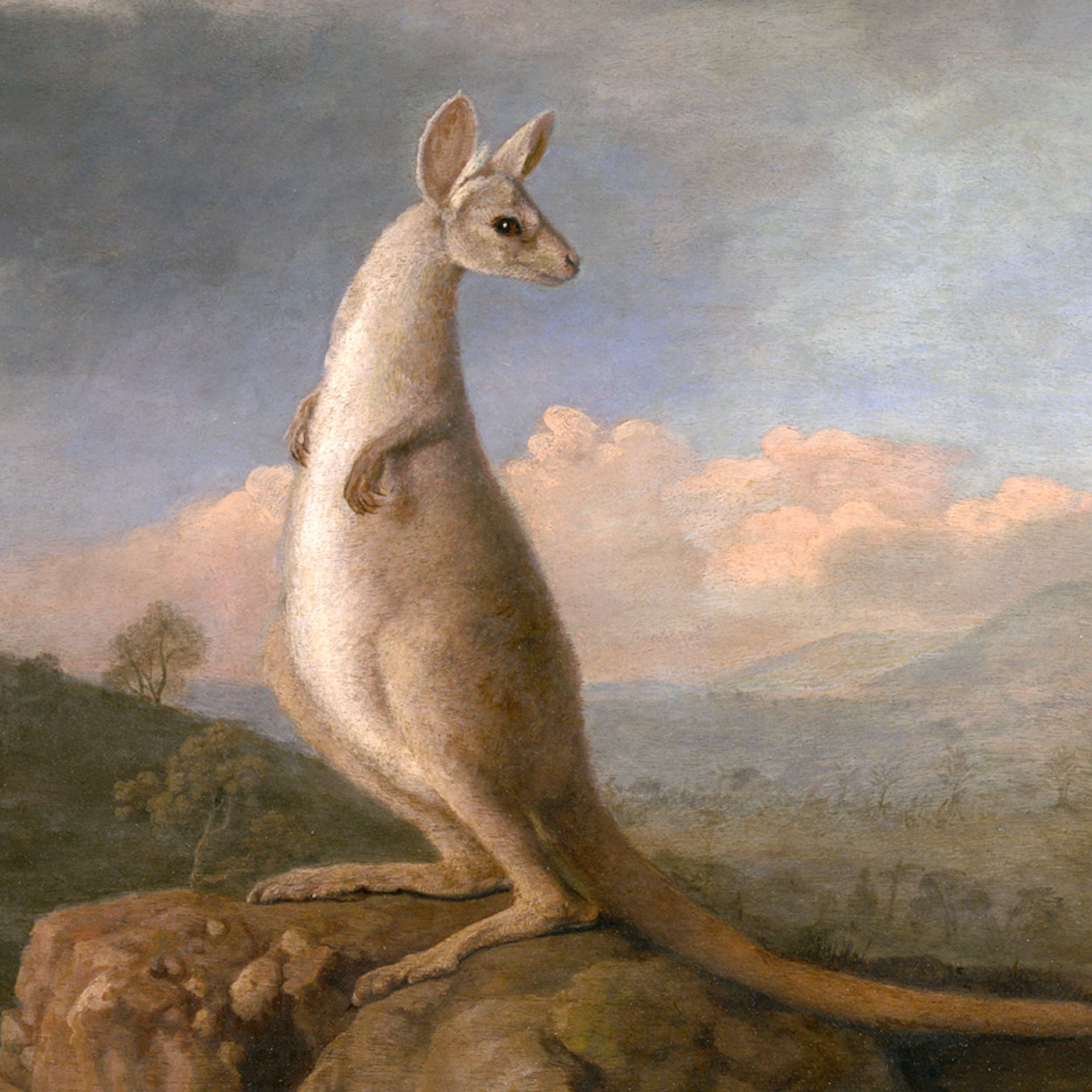 The Kongouro from New Holland (Kangaroo) 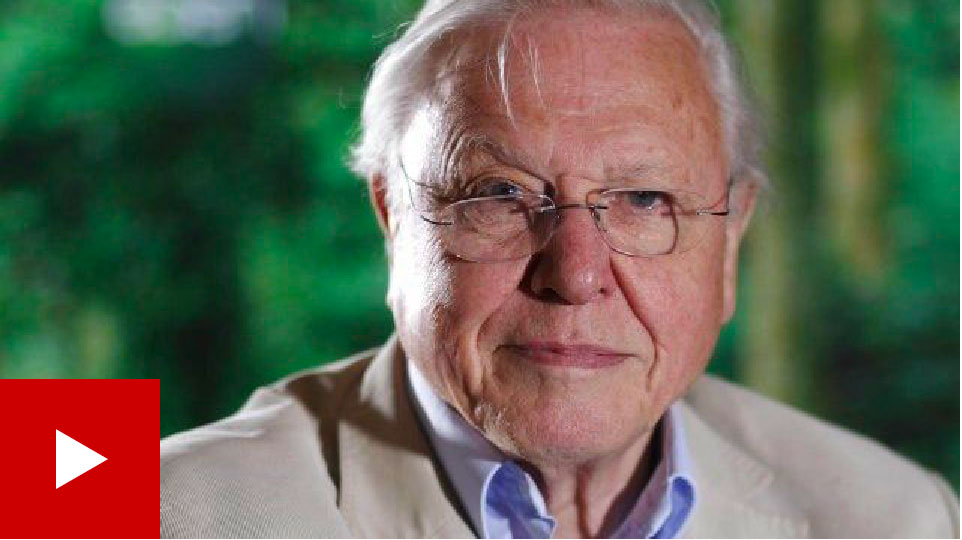 Sir David Attenborough lends his support to the British Bid

Two 18th century George Stubbs paintings, featuring a kangaroo and a dingo, are to stay in Britain after an appeal backed by Sir David Attenborough.

A £1.5m donation from shipping magnate Eyal Ofer has enabled the National Maritime Museum to buy the paintings. Commissioned after Captain James Cook’s first Endeavour voyage, they were put under an export bar in January after being sold to a buyer outside the UK.

Cook’s Endeavour voyage, and the two that followed (1772–75 and 1776–80), ushered in a new era of European maritime exploration that would have profound significance for the cultures, politics and societies of both explorer and explored. While far from uninterested in the economic and political possibilities of exploration, these three state-sponsored projects were motivated to a great extent by the desire to improve navigation and gain knowledge of uncharted lands, seas, peoples, plants and animals.

Cook’s ships were in effect floating laboratories carrying astronomers, artists, and natural scientists as well as seamen who collected, sketched, painted, measured and recorded what they saw. The voyages both reflected and came to define the ideals of the Enlightenment and served as models for the equally ambitious British, Spanish, French and Russian voyages of exploration that followed into the Pacific.

All three of Cook’s voyages produced significant scientific results. However, it was the dramatic revelations of new lands, species and peoples from the first voyage that captured the imagination of both the general public and scientific communities in Britain and Europe. 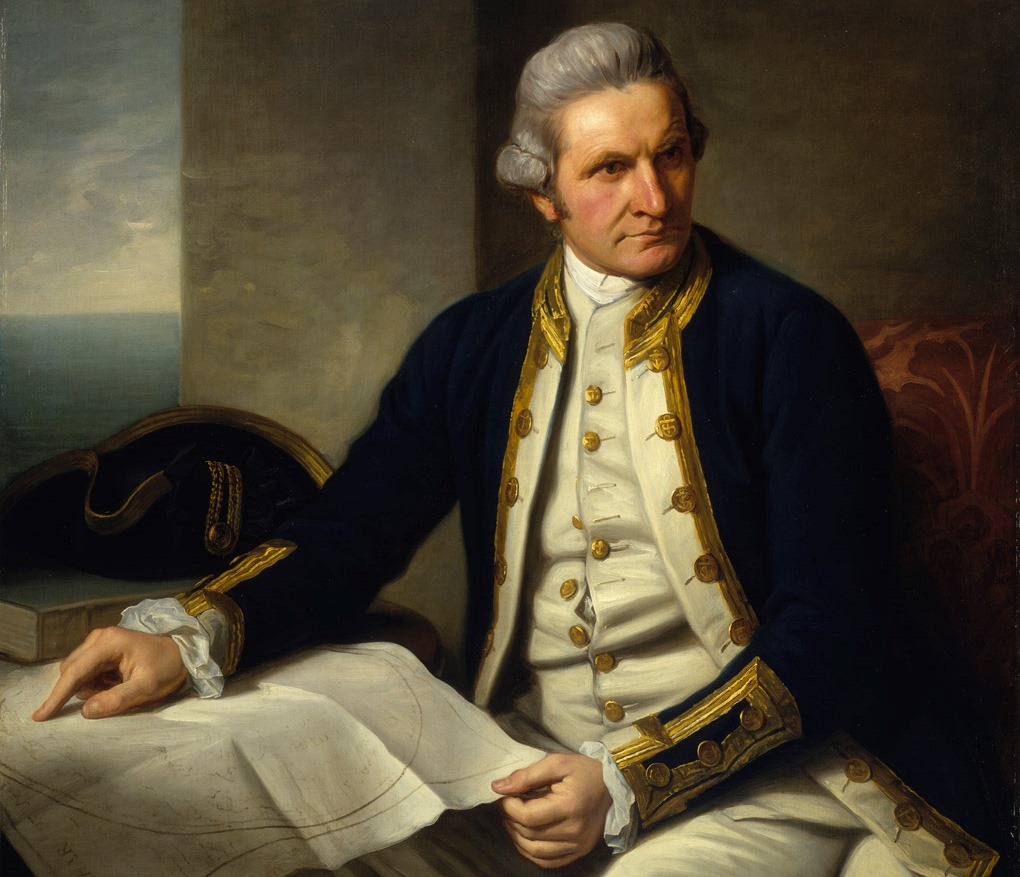 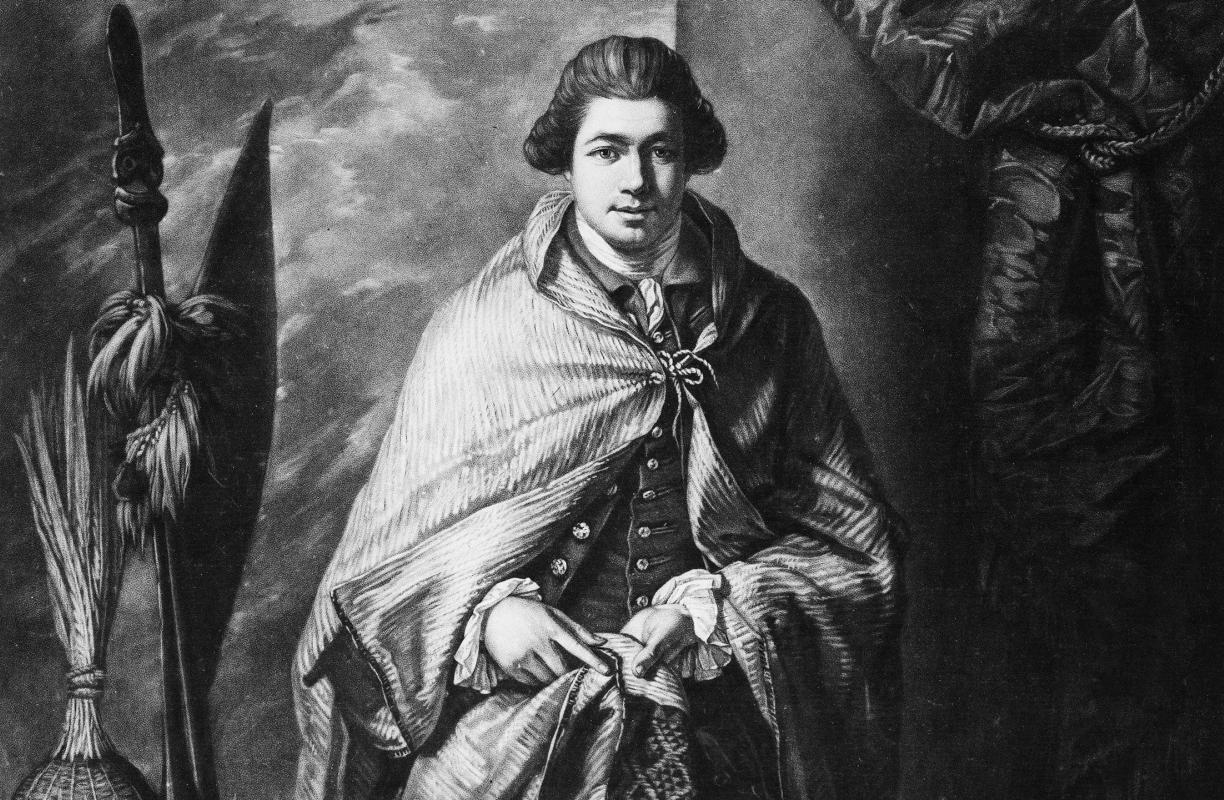 The scientific focus and outcomes of the voyage were due in large part to the gentleman-scientist Joseph Banks, who accompanied Cook on Endeavour. Banks’ personal entourage of eight included two artists and a botanist. Both artists died during the voyage but one, Sydney Parkinson, produced over 800 drawings of plants and animals (now in the collection of the Natural History Museum, London). The huge task of cataloguing Banks’ natural history collections occupied the botanist, Daniel Solander, for the rest of his working life. However, Banks’ ‘Florilegium’ –comprising the finished drawings that Parkinson completed before his death late in the voyage – was not published in his lifetime and only finally appeared (in colour) in the 1980s. The museum owns a full set of these colour engravings (ZBA5924-ZBA6667).

Banks’ decision to engage Stubbs so soon after his return in 1771 is testimony to the artist’s reputation as the foremost animal painter in Britain, and to the importance that Banks attached to these two examples of Australian fauna. Stubbs’ equestrian portraits may be more widely known today but the artistic importance of his ‘exotic’ subjects cannot be overestimated. Together with his anatomical studies, and more than the work of any other artist, Stubbs’s considerable painted menagerie of rare and unknown species (mainly from collected living examples then in Britain) embodies the interconnected status of the arts and natural sciences during the later 18th century.

‘Kangaroo’ and ‘Dingo’ are the only painted portraits by Stubbs of animals native to Australia, and the only occasion on which he was unable to observe his subject from life. In the absence of live models, the artist worked from written and verbal descriptions provided by Banks himself and, in the case of the kangaroo, a small group of slight pencil sketches made by Parkinson and a stuffed or inflated pelt (now lost) that was in Banks’ possession.

Banks’ decision to employ such a celebrated animal painter, renowned for his scientific methods, must in part be understood as an attempt to give the unfamiliar sights and discoveries of Cook’s first voyage the kind of cultural significance that could only be achieved through the public display and dissemination of great works of art. 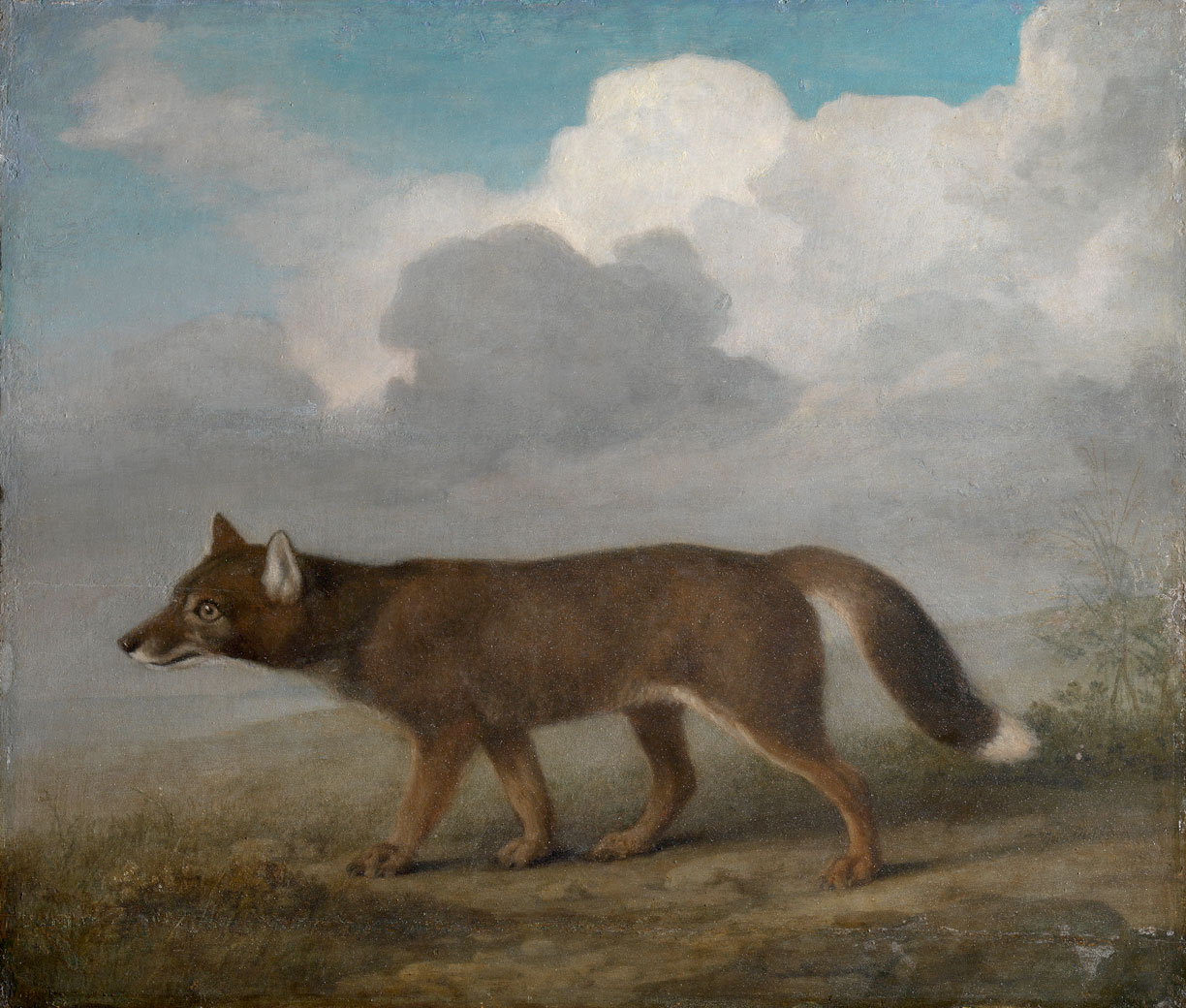 Portrait of a Large Dog (Dingo)

The afterlife of the paintings

Capitalizing on the topicality of the voyage and the novelty of his subjects, Stubbs exhibited both paintings at the Society of Artists in London in 1773, thus bringing to public attention two previously unknown animals that quickly became closely identified with the new world of Australia. Later the same year, an engraving after the image of the kangaroo was used to illustrate John Hawkesworth’s ‘An account of voyages undertaken … for making discoveries in the Southern Hemisphere’ (1773). This was the first major publication emanating from Cook’s voyage, creating great public and scientific excitement about and interest in the Pacific. The image was engraved many more times and subsequently became the standard visual representation of the kangaroo throughout the 19th century.

From 1777, Banks’ housed his ever-expanding collections of specimens and associated artwork in 32 Soho Square, London. Here he displayed the ‘Kangaroo’ and ‘Dingo’ with the now–iconic portrait of Captain Cook by Nathaniel Dance (also in the museum collection, BHC2628), which hung in the library. His house became a virtual museum and research institute, where scientists and politicians from across Europe would meet. In addition, Banks himself played a key role in the Royal Society, the Society of Artists, the Royal Observatory, Greenwich, and the Board of Longitude. The Botany Library of the Natural History Museum, London, holds all of the surviving botanical artwork from Cook’s ‘Endeavour’ voyage.

It is easy today to underestimate what an extraordinary feat this voyage was, and what a profound effect it had at the time and for the course of British and world history. Some measure of its ambition and impact can be gauged by the adoption by NASA of the name ‘Endeavour’ for its fifth Space Shuttle. In 2011 the Space Shuttle ‘Discovery’, named after Cook’s accompanying ship on his third voyage, carried on its final mission the Cook Medal (1784) from the National Maritime Museum’s collection (MEC1316). For the late 18th century, Australia was an equally distant, unknown world, and Stubbs’s ‘Kangaroo’ and ‘Dingo’ represented, in a very real sense, ‘alien’ species.